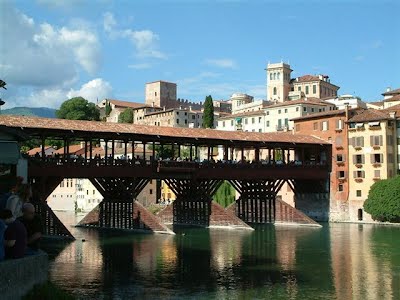 B&B Monte Grappa Guest House, thanks to its location, is the ideal starting point to easily reach many of the places that have made Veneto and Italy famous all over the World. In particular:

POSSAGNO Home of the sculptor Antonio Canova, the greatest exponent of Italian Neoclassicism (15 minutes)
ASOLO Considered one of the most beautiful villages in Italy, among other things it houses the home of Eleonora Duse (15 minutes)
CASTELFRANCO VENETO Birthplace of Giorgione (you can visit his home), this town is peculiar for its fortified wall still in excellent condition (25 minutes)
BASSANO DEL GRAPPA Famous historical city and home of the painter Jacopo da Ponte. Bassano del Grappa is the birthplace of Grappa, with its numerous distilleries and typical places where you can taste it. The Old Bridge, built by the architect Andrea Palladio, is the symbol of Bassano del Grappa and is one of the most distinctive bridges in Italy. (10 minutes)
MAROSTICA Beautiful historic city where there are 2 castles (the upper one and the lower one). Marostica is known around the world for the chess game that takes place in the town square every two years (even years) with live people (20 minutes)
CITTADELLA Beautiful walled city (30 minutes)
VENEZIA The most beautiful city in the world, UNESCO World Heritage site (1 hour by train)
VICENZA The city of architect Andrea Palladio, UNESCO World Heritage site for its numerous villas and monuments (45 minutes)
PADOVA The city of St. Anthony (it contains his remains) is also the home of one of the oldest and most important universities in Italy and numerous works of art (one among all the Scrovegni Chapel illustrated by Giotto) (40 minutes car or by train)
TREVISO The "living room" of Veneto (55 minutes)
VERONA The city of Romeo and Juliet and the famous Arena. Verona is also well known for its cultural events and for its wines, famous throughout the world. Verona is an UNESCO World Heritage site. (1 hour and a half away by car or train)
DOLOMITI UNESCO World Heritage since 2009, the Dolomites are considered among the most beautiful mountains in the world (Pale di San Martino and Agordo 1 hour)